Rumours have been circulating for years that the American military killed a creature which was “three times” the size of a normal man.

The beast was supposedly shot dead after taking “multiple hits” in the Kandahar region when troops were looking for a missing patrol.

This outlandish claim, which has been denied by the US administration, has recently resurfaced on social media.

It was first featured in a YouTube documentary produced by filmmaker and blogger L.A. Marzulli that was released two years ago. 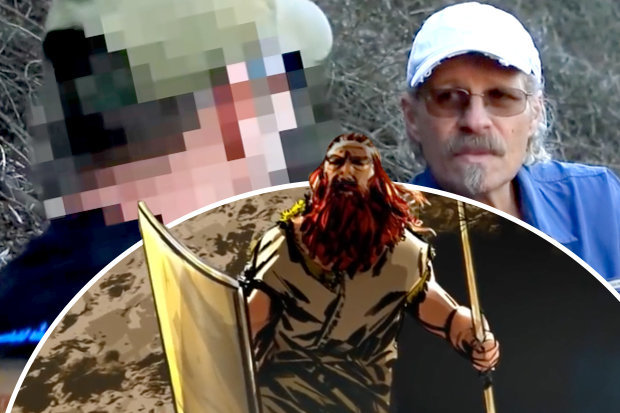 They alleged that the “giant killing” was a common knowledge among fellow troops, but no-one could speak publicly.

One soldier described the giant as “three times the size of a man” and had “extra digits on his hands and feet” as it swung a huge blade.

This was a monster, with a red beard and his hair was long-ish past his shoulders.

“And Dan runs at him and starts shooting which broke all of us into the reality because it was surreal.”

The soldiers claim Dan was killed by a blow from the sword before the giant was killed following “multiple hits”.

Allegedly, the creature’s 1,1000 lb carcass was airlifted away in a cargo net by a helicopter and all those involved were forced to sign a non-disclosure agreement as the strange firefight was supposedly covered up.

L.A Mazuilli is convinced the creature was a manifestation of a Nephilim, which is described in the Book of Genesis as offspring of Gods and humans.

However Snopes.com found that the only serving soldier called Dan who was killed in that year in the war-torn country died with three others in an accident clearing explosives.

The US Department of Defense has no incidents in which military casualties are listed involving a giant.

If you want to grasp what really happened may I suggest you go to my site and purchase Watchers 10!

For years, there has been an on-going effort to get samples to perform DNA testing on the Peruvian skulls and other organic creatures. Bureaucratic red tape, the TSA, and other roadblocks have prevented it. But now, after decades of being hidden in a box in Oregon, a huge Peruvian skull is found — one that has been in the U.S. for so long it became available for DNA testing. Along with this, the red hairs from the baby mummy (WATCHERS 8) and three other skulls were tested. The origins of the elongated-skull people are finally known scientifically.

Two military men step up to tell their stories of giants in Afghanistan. Apparently this is a well-known phenomenon by the locals who tell stories of cannibalism and frightening encounters. When some troops didn’t report in at their designated rally point, contract operators were sent in to find them. The carnage they found was something no one expected. Special guest George Noory (Coast to Coast AM) describes a show in 2008 with Steve Quayle where an Air Force pilot said he flew a giant out of Kandahar. This is the rest of the story that hasn’t been told.

Jaime Maussan shows L.A. Marzulli a winged creature that he has kept confidential for years. Is it real or a masterful fake? Then, L.A. takes us to the Island of Catalina where giants were found near the turn of the 20th Century. Why does no one know?

7 thoughts on “The Kandahar Giant “RESURFACES?””